This week in Behind the Paw we’ll connect Frank Lloyd Wright to Geocaching, science fiction TV from the 1990’s, a favorite children’s toy and a very cool dog house.

“Most scenes for two episodes of the television series seaQuest DSV were filmed at Florida Southern College, and both were broadcast during the second season in October 1994. Scenes for “Sympathy for the Deep” were filmed in the Ordway Building, and much of “Playtime” was filmed in the Annie Pfeiffer Chapel. Both buildings are clearly recognizable in the episodes, although sets and props altered the look of both during filming. Other local scenes were filmed in FSC’s Hindu Garden of Meditation, downtown around Munn Park, and at Joker Marchant Stadium.” (n.b. Joker Marchant is the Spring training home of the Detroit Tigers)

And a favorite children’s toy? This tip was passed along by Gizmo’s friend Sparky Glover and her Mom Terisa from The General Store in Lakeland, FL. That toy would be Lincoln Logs, invented by John Lloyd Wright, son of Frank Lloyd Wright.

“Lincoln Logs were first produced in 1916 by John Lloyd Wright. Records show that the J. L. Wright Company of Chicago, Illinois, obtained its patent for the design on August 31, 1920 and had the Lincoln Logs name registered on August 28, 1923. Building logs of similar designs had been produced by several other toy companies since the civil war but John L. Wright’s version was very successful from the beginning and has remained so to this day.”

This is the  Imperial Hotel– John got the idea for Lincoln Logs by observing his father build this beautiful building. 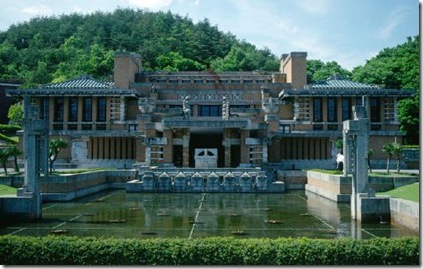 So what about that dog house? Jan from The Poodle (and dog) Blog first told me about this. In 1950, Frank Lloyd Wright designed a home in San Anselmo, CA for the family of young Jim Berger. Six years later, in June of 1956, Jim thought it would be nice if his black Lab Eddie had an FLW house too, so he wrote to the architect. The architect wrote back stating he was too busy, but that Jim should contact him again in November. Jim did just that, and the Wright followed through with a design for “Eddie’s House” in 1957.  Photos of the original letters in this exchange can be seen here Please Design Me a Doghouse.

It took a while, but Jim’s dad eventually finished Eddie’s doghouse in 1963. Sources differ on who the house was built for…some say Eddie, and some say that Eddie had passed on by then and it was built for a different dog. All agree  that the doghouse leaked and that no one  liked it very much.  It was  never used and was dismantled only 10 years after it was built.

In 2011 Jim Berger rebuilt “Eddie’s House” from the original plans and it was used in the documentary film “Romanza” a study of Wright’s designs in California which premiered in October 2012.

Bringing the story full circle, Romanza’s director Michael Miner in 2008 released a documentary entitled “A Child of the Sun: The West Campus of Florida Southern College” . Clips of that film can be seen on Miner’s website Designed By Frank Lloyd Wright.com .

Thanks to Jodi and Heart Like a Dog for the Follow-Up Friday blog hop, the blog hop that lets you wrap up your week and leads you right into the weekend…

Hi! I'm Gizmo...a handsome terrier-about-town with a distinct point of view. I will write about whatever interesting things come across my desk, appear on my twitter feed @GizmoGeodog, or meet me out on the geotrails. I love to geocache cause it takes me to all the wild places & I can get back to being a real dog. I care about all my brofurs & sisfurs who haven't found their own forever homes yet, & raise funds to help them whenever I can. My girl brought me home from the shelter & together we explore our world. I do my best to make her smile, & she does her best for me. We are a team.
View all posts by Gizmo →
This entry was posted in Uncategorized and tagged blog hop, canine chat, dogs, Florida, Florida Southern College, Frank Lloyd Wright, geocaching, John Lloyd Wright, Joker Marchant Stadium, Lakeland FL, Lincoln Logs, National Register of Historic Places, petbloggers, Pets, terriers. Bookmark the permalink.